My weekend at Music Republic Festival, Vietnam: Squat toilets in the dark and feeling like a Z list celebrity 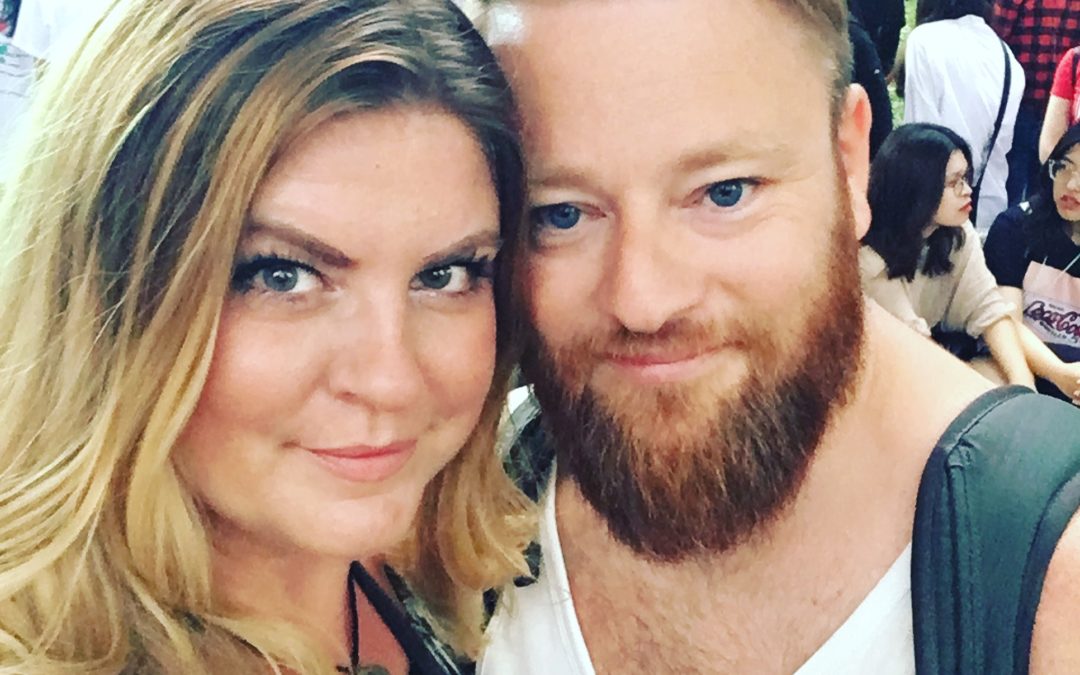 Ever since I arrived in Asia I’d been looking for festivals to go to. I love the buzz of waiting in line, ticket in hand listening to the massive bass of the sound check. Standing in a field with lots of like-minded people to enjoy good music is totally my jam. Plus, with the first few photos of festivals back in Europe & America starting to make it onto social media I had serious FOMO creeping in (and I am the queen of FOMO) So when I stumbled across Music Republic Festival, a 2 day Electro/techno festival in Hanoi, online I knew I had to go. At that point I was in the beautiful Vietnamese city Hoi An (not to be mistaken with Hanoi!) about 800kms south of where I needed to be. Luckily there are lots of cheapo airlines in Asia and I was able to get a last minute flight for around £25 with Jetstar, bargain! Getting tickets so last minute was maybe slightly more difficult than just buying online, but alas they were sold out, boo! I ended up putting a shout out for tickets on the Facebook event page, not something I’d recommend in general because you leave yourself open to scammers. Luckily the very lovely Tran from the festival production team contacted me and arranged to meet me with some festival passes that night! We had a few beers and he told me all about the show and we talked about the music/clubbing scene in Vietnam. It was soooo nice to meet and get a locals perspective. 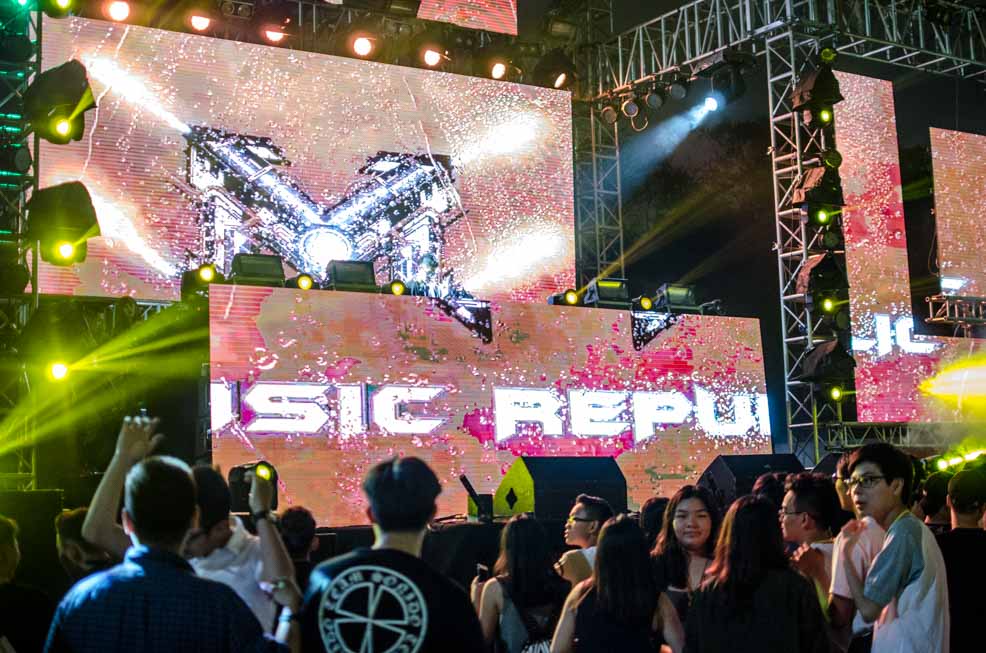 On the day of the festival we rocked up to Thōng Nhát Park, in the French Quarter and were a bit taken a back that the little old lady at the park gates wanted 8000 VND (roughly 27p/35¢) “we’ve got tickets to the festival!” we said. Not quite “don’t you know who we are”…haha, but nope, she was having none of it. Turns out, the parks in Vietnam are more like public gyms and sports centres, so everyone has to pay up, no matter what. We shrugged our shoulders and stumped up the cash, it’s not exactly a lot of money after all.

suddenly we were the star attraction, cameras were flashing, people clambering for selfies

Waiting to go into the actual arena was pretty interesting as we were the only westerners around, suddenly we were the star attraction, cameras were flashing, people clambering for selfies etc. It felt a bit weird TBH, but we just decided to go with it and style it out, rocking our best poses. If you come to Vietnam you’ll realise this happens a lot to anyone who doesn’t look Vietnamese. I’ve had my photo taken on the street more times than I care to remember and my BF with his bushy red beard had started to become a minor celebrity, being called everything from Messi to Fidel Castro, which we both found pretty funny. The photos continued throughout the festival too, pretty much everyone wanted us in their group photos. 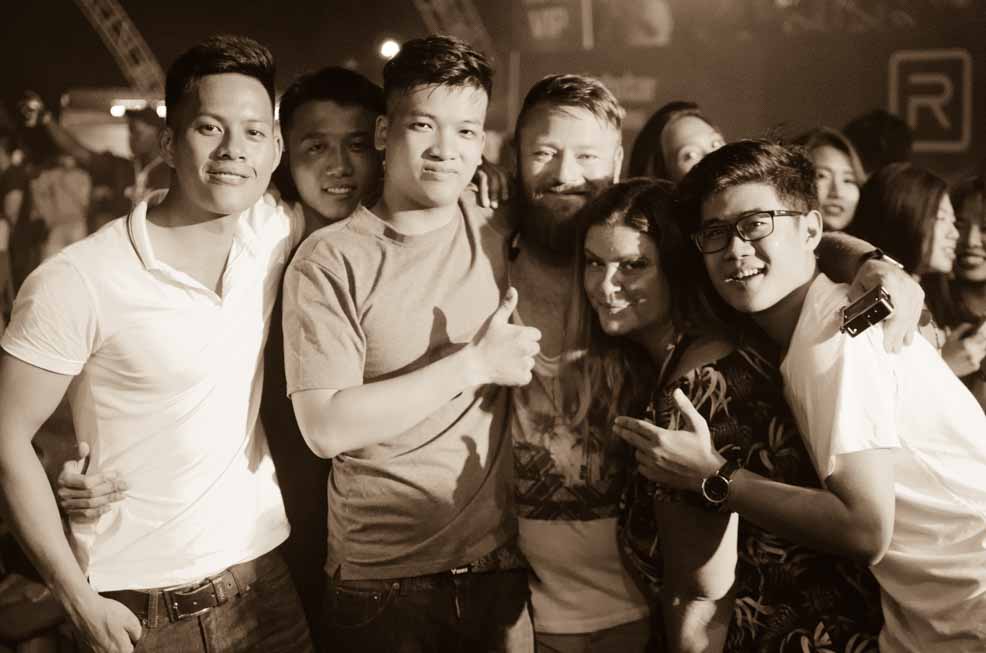 Heading into the festival I did what I do at every gig/festival/party and headed straight to the bar, natch! There was 2 little tents with trestle tables full of snacks and fruit juices….”erm, where’s the booze?” Oh hell no, please don’t tell me this is a DRY FESTIVAL?? Turns out, the Vietnamese ravers are more into laughing gas balloons (sold on site) and weed (not sold on site…..legally anyway! Ahem) Luckily it wasn’t totally sans booze, there was a little gazebo in the corner selling cans of Saigon beer, nothing else, just beer. It was a token system, something that’s used at a lot of big events. Thing is I bought the token, and then handed it straight back to the same person to exchange for beer! I did have a little chuckle, no skin off my nose, but I’m sure that defeats the point of a token system… 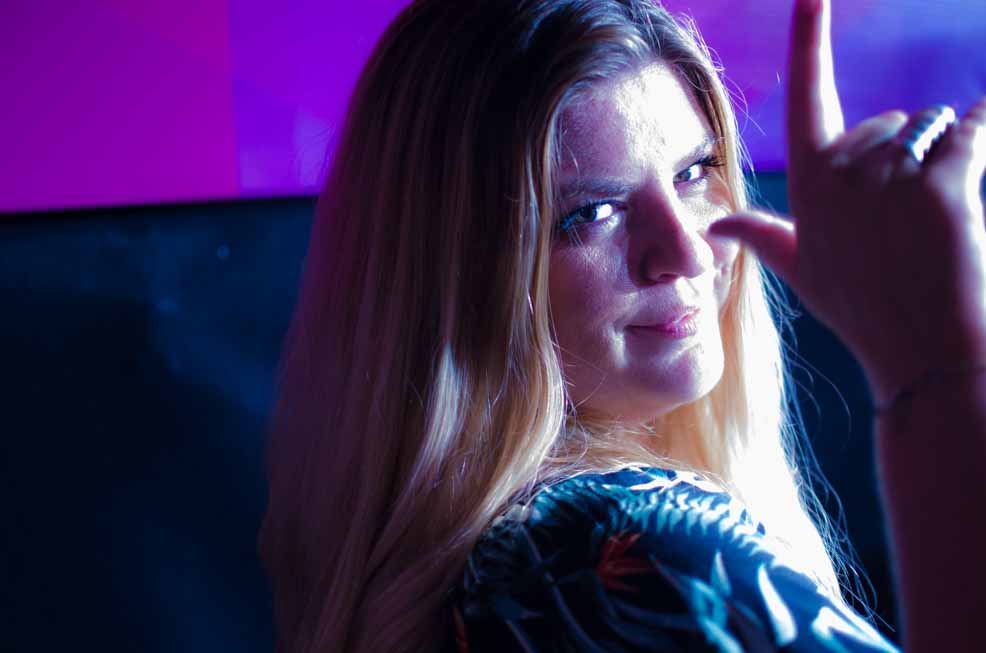 Anyway, beer in hand it was time to enjoy the tunes. After multiple beers it was time to go pee, the toilets at festivals aren’t known for being particularly pleasant. If you’ve ever been to the long drops at Glastonbury, or stepped inside an unbearably hot port a loo that stinks of wee, you’ll know what I’m talking about. But the port a loos at Music Republic Festival were a little errrrr different, a porta squat toilet noooo. And not only a squat toilet, but a PITCH BLACK SQUAT TOILET…with a very VERY wet floor. I could have cried, BUT with no choice I just got on with it, trying not to think about how my flip flop clad foot was now definitely covered in pee!

I just got on with it, trying not to think about how my flip flop clad foot was now definitely covered in pee!

On to the music! Head-lining was Don Diablo, a Dutch techno DJ, and pretty much the only act I’d heard of, plus a load of popular Vietnamese DJs playing a mix of Electro, Techno, trance, plenty of big hitting, crowd pleasing anthems thrown in. The crowd took a while to warm up (at this point we were still being asked to pose for loads of photos) but by the time the headline act came on the crowd was going mental, even doing the classic sit down dance. It wasn’t a cool, club kids vibe just a couple thousand people having a really good time. 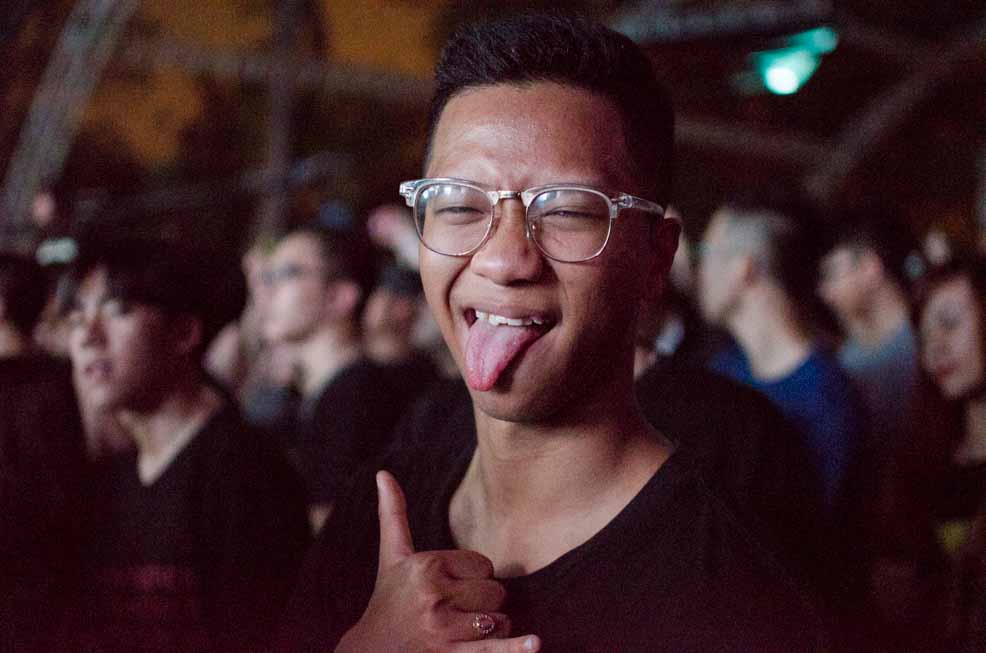 In total honesty I wouldn’t really call it a festival, as there was only the one stage and no other activities. The second day had a water dome that sprayed water over the crowd while dancing. Great way to keep cool, but not such a good look when you look like a drowned rat, I guess everyone looks like a sweaty mess after a rave though. However, for an out door clubbing event there was a really good mix of acts and Don Diablo absolutely blew everyone away with his show. 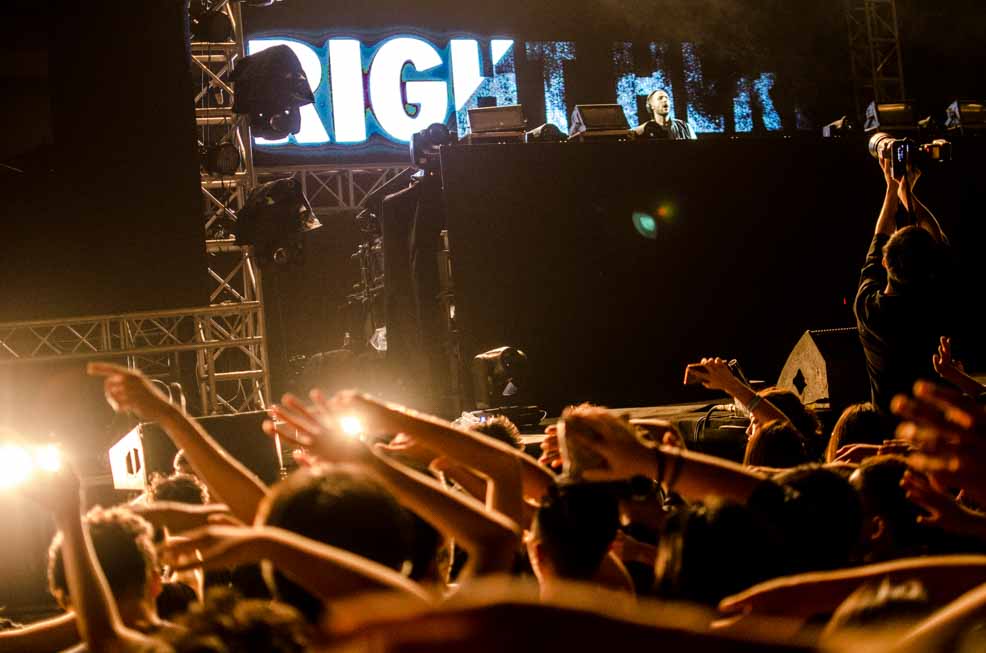 The festival scene in Vietnam still has a long way to go, it’s unlikely you’ll see lots of Coachella/Glastonbury style events anytime soon but what Music Republic have achieved in the last couple of years is pretty awesome. The Entertainment company behind it (Live Entertainment) are involved in some pretty awesome events in SE Asia and also expanding the Music Republic brand all over Vietnam. So if you are ever in the area keep your eyes peeled for more of their concerts and events. 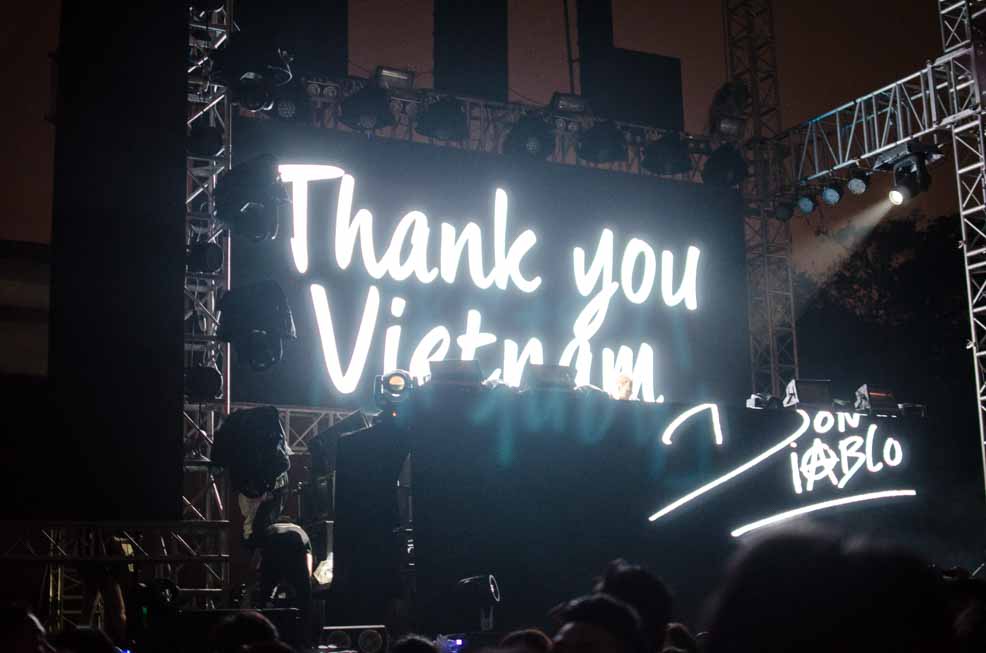 Have you ever been to a festival/concert while on holiday or travelling? Did you notice any big cultural differences? I’d love to hear your stories.

I’m not long back from Lindisfarne Festival, a brilliant 3-day end of summer blow out party on Beal Farm in Northumberland. It felt great to squeeze in a last HURRAH of the year in our old VW campervan, which was stranded down in Bristol for most of the summer after Glastonbury Festival… that’s a story for another day. However, with the campervan back in our possession we couldn’t wait to go festivalling again, and what an amazing festival it was!
Read More

25 Festival essentials from a festival pro!

Last week I was interviewed on BBC Radio Newcastle giving advice on festival essentials, as well as sharing some of my favourite festivals, big and small. For those of you new to Eat Travel Rave Repeat, or who don’t know my back ground, I worked in Festivals and live events for almost 10 years doing a variety of roles…

The Great Exhibition of the north is a huge 80 day festival, hosted by Newcastle & Gateshead celebrating: art, culture, innovation and technology in the north of England. The summer is set to be packed with events and exhibitions in many of the cities’ museums and cultural hubs, including lots of activities and a range of live performances to suit all ages and interests.

Review of 2017 – Quitting London to travel

I actually wasn’t going to write a review of 2017, not really sure why. Maybe I thought no one would really give a damn (maybe you don’t), but as I was sat writing my goals for the next few months and the year ahead I was thinking maaaan 2017 was actually a really...
Read More

If you read last weeks blog post where I totally gushed over Canggu, Bali and all its awesomeness you’ll probably have realised that Bali is pretty much my spiritual home. Where Canggu is all chilled, healthy surf vibes, neighbouring Seminyak is more glitz n glam with...
Read More

5 of the Best music festivals in September

How fast has this summer gone? It’s by far my favourite time of the year, and I feel like every year it zooms past. So many cool parties, festivals, holidays, BBQs, birthdays and usually a wedding or two, the social calendar fills up pretty fast. But if...
Read More

If you want to go to this years Edinburgh Fringe Festival it’s not too late! Here are just a few of the best places to stay in the city that won’t break the bank